This was written in July 2008, when Boris Johnson was campaigning to become mayor of London and had just announced plans to ban alcohol on public transport and bring back the Routemaster bus to replace the bendy buses introduced by Ken Livingstone. There’d also been a few stories in the news about bendy buses spontaneously bursting into flames. 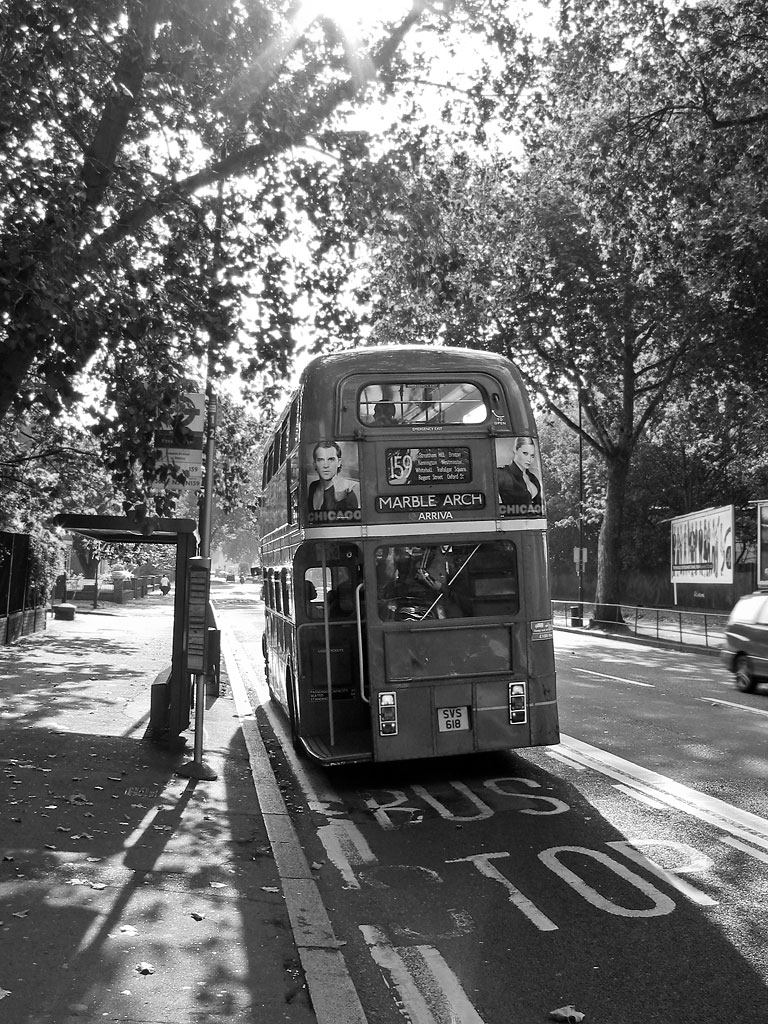 … of course, unless you’re going round and round the Circle Line with a big daft beatific grin on your face, the average tube journey simply doesn’t last long enough to get drunk; if someone is drunk on a tube train – or, indeed, is going round and round the Circle Line with a big daft beatific grin on their face – it’ll be because they were drinking before they got on. Banning alcohol on public transport will simply mean that people stop and drain the can that was meant to last them all the way to Ealing Broadway before flashing their Oyster, rather than after; and then, somewhere near East Acton, when the effects of necking 500ml of lukewarm Fosters Export in 30 seconds start to kick in, and fellow passengers begin to politely object to having their shoes doused in lagery vomit while the vomiter, now emboldened, is thinking what-the-hell, and popping open another, things will get a bit tasty, and some poor LU bluejacket will have to step in. Or, more likely, just hold the train in the station to wait for the cops. But, given the only other thing Boris has done so far is decree that Rise, Europe’s biggest anti-racism festival, should drop all the anti-racist stuff in case people get the wrong idea (Pride will also now be rebranded as a celebration of the freedom to wear sensible shirts and trousers so as not to make people feel uncomfortable), we should probably just count our blessings. At least there’s no sign yet of that most invidious of manifesto promises (I use the word “manifesto” loosely) – the reintroduction of the Routemaster bus.

I was reminded of this on Saturday lunchtime when, while crawling up the Mile End Road – on a slow-moving Number 25, I hasten to add, I wasn’t making my way back to Stepney Green station on my hands and knees after being told by the man at the ticket barrier that I wouldn’t be allowed on the District Line with the two bottles of Chilean merlot I’d just bought at Cambridge Heath Road Sainsbury’s – we were passed by a scarlet procession of antique open-platform buses. Each bus was laden with middle-aged men, and each middle-aged man was laden with a camera and an expression that middle-aged men generally only possess when unexpectedly confronted by an under-dressed au pair on the landing or a bowl of treacle pudding and custard on the hostess trolley – or, indeed, any permutation of these things.

Back home that evening, I did a bit of research, mostly involving googling the words “antique” and “buses” – and then, just for completeness, the words “au pair” and “custard” – but failed to turn up anything that I’m prepared to discuss here. I can only suppose it was one of those events aimed at people whose way of coping with modernity is to curl up with a copy of the Ian Allen 2008 Handcart Handbook in which the very barrow we’re all going to hell in has been neatly ringed in green biro.

The thing is, wistful middle-aged men aside, I can’t help feeling that Routemasters – cramped, uncomfortable, unable to deal with any item of shopping larger than a small tub of yoghurt – are mourned mostly by people who’ve never actually used one, but who’d still like to see others using them. People who’d employ the word iconic and not expect anyone who didn’t have the contents of a hastily downed can of lukewarm Fosters Export in their stomach to vomit over their shoes when they did so. Not, in short, people who’ve ever waited in the rain on Kennington Road as 159 after 159, each replete with its full complement of five yes FIVE standing passengers – not to mention a grim-faced conductor standing arms-folded at his pole like a particularly grumpy exotic dancer who’s still sulking that all the nurse and policewoman uniforms had been taken – splashed by. Or who’ve ever floundered like a nervous toddler in an overfilled IKEA ball pit in order to secure exit over the laps, shoulders and bags of fellow passengers. Or who’ve ever ended up bruised on the pavement after some idiot exercised his or her right to step randomly from the back platform in front of any passing bikes. Though they almost certainly are the people who complain about old-style classic caffs closing, adamant that if they didn’t write letters to Time Out demanding that some poor sod should work 16 hours a day just so that they can occasionally slum it picturesquely and buy a mug of tea for 50p, then a valuable part of London’s classic social heritage – slums, rickets, low life expectancy – will be lost.

No, sorry, but in the bendy vs Routemaster argument, the only real problems with the bendies are that (a) they take up too much space, (b) the views are rubbish, (c) selfish people ride them for free (which was actually pretty easy on a Routemaster too, especially if it was busy and you kept your head down) and (d) the whole spontaneous combustion thing.

But, then, the whole spontaneous combustion thing has always been a bugger, as my Uncle Eric once commented, sadly eyeing the wisps of smoke that were starting to rise from his hips.

Again he thuds into Percy Ingle’s window; she sighs, scoops him up, tosses him back into Lewisham High Street, and tidies the London cheesecakes; tiny pigeon footsteps dent coconut strands.

Why brown bears don't make good housemates and Judy Brown has no use for oven gloves.

Early morning nudity on the 07:03 from Slade Green, and how Hubert the Inflexible Frenchman left me unable to lift heavy weights for six months.

Two disconsolate psychogeographers reflect on how some of the ley lines that were dug up to build the Basketball Arena for the 2012 Olympics had been there since the days of King Lud.

How only Penge Homebase, out of all south-east London's DIY superstores, seems to have grasped that Christmas is an annual event.

Why David Beckham is a true gent, Jonathan Ross can do no wrong, and Carol Thatcher will be getting her rice and peas delivered by Ocado in future.

I try to get to the bottom of Blackheath but just end up having an overpriced (though very nice) muffin.

A philosophical taxi driver considers whether a pick-up can actually be said to truly "exist" if he doesn't have the postcode for his satnav.

A brief rumination on the fickleness of both women and space-time, and the possibility that access to some sort of infinite primordial darkness can be gained from the southbound Bakerloo Line platform at Waterloo.

In which I am forced to bribe an elderly man in Wolverhampton with a spongey dessert in order to demonstrate to Richard Branson that trains are not planes and that you only need choice if the system has failed.