This piece was written in March 2011 to mark our move across south London from SE11 to SE10. We’d actually been forced to leave the old flat in December, despite the new place not being ready, decamping to a very cold and snowbound Stoke-on-Trent for Christmas/New Year with all our worldly goods deposited in the Big Yellow Storage on Kennington Lane (our unworldly ones were left in a pile at the end of a rainbow in Tilbury). This was, to be blunt, not the best of times to try to launch and publicise Soho!, the Smoke board game.

So, after thirteen years at the mercy of Lambeth Council, I suddenly find myself dropping down the postcodes, from SE11 to SE10. Or, as Emma the Estate Agent always liked to say, “Greenwich”.

“Greenwich?” friends exclaim when they come round to have a nose, “Greenwich?!?? How can someone like you, with your failed record label and your failed magazine and your hugely misconceived board game, afford Greenwich?”

And then they’ll ask me to repeat my answer, having not quite heard me the first time on account of the 17:39 to Dartford having begun grinding and squealing past the kitchen window at the very moment I started speaking. And I – this time resorting to mime because, like all rush-hour services, the 17:39 has ten coaches, so the grinding and squealing will not be ceasing any time soon – will explain that, to paraphrase Emma, it was priced to take account of the circumstances; the circumstances being that, every 10 minutes, a train will appear from the east carrying the good people of Charlton, Woolwich and Slade Green onwards to Deptford; and, also every 10 minutes, a train will appear from the west carrying them back again, presumably because – well, have you ever been to Deptford?

And my friends will concede that I have a point; before asking if I also have a mop and bucket, as the more liquidy contents of the upturned pedal bin I recklessly employed in miming the word “Deptford” are starting to make them feel queasy.

Having South Eastern Trains going furtively about their murky business directly behind your kitchen wall at ten-minute off-peak intervals wouldn’t be everyone’s cup of tea, I know, but – I’m not everyone. “Repeated exposure to The Railway Children at an impressionable age has,” I assured Emma, “left me with a thus far unquenched hankering to spend time alongside a picturesque railway. Not to mention – though this only started when I was a bit older and had also had repeated exposure to Logan’s Run – an unquenched hankering to spend time alongside a picturesque Jenny Agutter. And, even if my fantasies have always placed the glistening tracks in a deep cutting at the bottom of a long sunlit garden – and Jenny Agutter in a robust hammock at the top – that’s hardly a dealbreaker. So, yes, until our father returns from prison after being cleared of selling state secrets to the Russians and we can all move back to the large house in – ”

At this point, I realised that Emma had begun explaining loudly and rapidly about the surprising amount of storage space, so I gave up trying to apprise her of my intention to pop along to Cutty Sark DLR and instigate a friendship with Mr Perks the stationmaster, and simply told her we’d take it.

Because, after all, what’s a few trains? Being roused from sleep by the 05:32 to Charing Cross and thus beginning the day two hours earlier than intended… every day… except Sunday… is hardly the end of the world. Besides, there’s actually something rather magical about being able to peer directly into a string of brightly lit carriages from the wet side of a shower screen, to see the slumped commuters peering blearily back up at you as you soap yourself down, and – ah, but now you’re looking at me just like Emma used to. I’ll shut up.

Seriously, though, I don’t know why people think that nudity and public transport are such a bad mix. They’re two of my favourite things.

I still miss the non-corridor compartment stock on the Shoeburyness line, you know.

Though, by golly, that moquette was itchy. 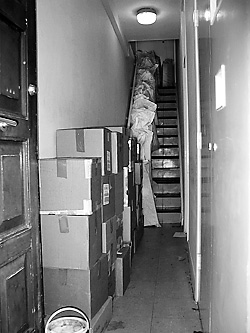 Sorry, where were we? Ah, yes, Greenwich. The Place Where Time Begins. Which is useful, really, as personally it felt like Time pretty much ground to a halt at the start of December. I wasn’t going to bore you with the details, but – heck, this is a blog, so it would almost be abuse of the format if I didn’t.

December. That was when we launched our board game, Soho! – it was a festive gesture. Or, rather, that was when we tried to launch it. Sadly, though, the board and cards got held up at the printer’s because of all the snow and ice. And then, once we’d sat up for nights on end collating cards and sticking dice in plastic bags, all the Christmas mail-order got held up in the next batch of snow and ice. The rest of the month I spent trying to reassure people that their present really had been posted, and offering refunds to those who remained unconvinced. None of which was easy without a computer.

And why didn’t I have a computer? Well, that was because Hubert, the impatient and inflexible Frenchman who was moving into our old place, was not prepared to wait until we were able to move in here. Which meant we had to (a) ship all our possessions to Big Yellow Storage, (b) put everything that wouldn’t fit into Big Yellow Storage into my parents’ garage, and (c) go to live in Stoke-on-Trent for four weeks. And Stoke-on-Trent – The Place Where Time Runs Backwards – really isn’t a good place to be when you’re trying to publicise and market a board game about London – or even when you’re not, unless you have a fondness for Staffordshire oatcakes, Port Vale FC, or life in the 1950s.

Now: the thing about having lived somewhere for thirteen years is that you’ll almost certainly have spent at least twelve of those years lumping stuff into the loft: defunct Hoovers, broken chairs, a picture of a sad-eyed labrador done in cross-stitch, you know the kind of thing… a few hundred unsold magazines… a few thousand unsold CDs… several large polythene sacks of 20-sided dice… just the usual stuff, but it all adds up. In fact, it turned out that – as far as Big Yellow Storage were concerned – we’d been hiding a 3-bedroom flat (and garage) in our glorified Lambeth bed-sit.

Finding a 3-bedroom flat (and garage) in your loft is one thing. Having an impatient and inflexible Frenchman demand that you get rid of it by the end of the week because he has builders coming in to expose your floorboards and add a little Gallic flair to your stairwell is altogether less fun; and lugging that amount of lumber down two flights and a loft ladder means you’re quite likely to do yourself a mischief, as they used to say in Seventies sitcoms. Which is why I’m now on an 18-week waiting list at Lewisham Hospital and banned from lifting heavy objects or indulging in strenuous bouts of hollow laughter for the next six months.

All of which is, as Emma used to say, way too much information. But I’ve concluded from the lack of emails and orders since Christmas that either (a) you’ve died or (b) you think I have or (c) the country’s economy and social support networks are being serially dismantled by a smug clump of clueless and incompetent bubble-headed chumps at such a pace that no one has the money to buy board games or the inclination to be sociable. And (c) is clearly absurd, given we live in a progressive modern democracy in which that sort of thing couldn’t possibly happen without people taking to the streets to protest in vast numbers, or at least without Her Majesty’s Opposition kicking up an almighty fuss, so – well, I thought I ought to write.

The photos, if you’re interested, are the view from the back window in Greenwich and the hall of the old flat in Fitzalan Street (with bags of Soho!s on the stairs ready to be collected by Royal Mail).

From the top of the bright red climbing frame, the boy with the seventies afro eyes my camera suspiciously; his Staffy cross, paws wobbling on the narrow slats, does likewise.

A night with Chris Addison causes me to wonder whether the world would truly be a better place if George Osborne got a job in Dixons.

How the removal of bendy buses on route 507 inspired a new TfL competition to redesign the wheel in time for 2012.

A riparian pub crawl in which Chelsea midfielder John Obi Mikel is mistaken for Jedi master Obi-Wan Kenobi outside the Waterside in Chelsea Harbour but luckily a goose arrives and causes a diversion before it all kicks off.

The 2011 London riots: while Tottenham is in flames, Chipping Norton is in Oxfordshire.

Partridges? In London? Sorry, guv. Do you a nice pigeon, though. Sorry it's a bit wet.

A brief rumination on the fickleness of both women and space-time, and the possibility that access to some sort of infinite primordial darkness can be gained from the southbound Bakerloo Line platform at Waterloo.

I am a binman for the council
And I walk the back roads,
Searchin’ in the dark for another bag to load...

Why brown bears don't make good housemates and Judy Brown has no use for oven gloves.