This piece was written in December 2010, so obviously over two years before the death of Margaret Thatcher. Some would say there’s now a “good taste” argument for removing it from the site, but… it’s a criticism of her policies, not her person, and the policies don’t change or suddenly become acceptable with her death. And they’re still championed by those who’ve come after. Also, to deny that people felt how they did would be to rewrite history. The lyrics are from Hefner’s The Day That Thatcher Dies, from the wonderful We Love The City album – probably the best set of songs ever recorded about London (Ray Davies and Madness don’t come close). They were written by Darren Hayman back in 2000, so are even older than this piece, and are quoted entirely without permission, but hopefully Darren won’t mind. And the Tory quotes are all genuine; when I was originally writing the piece, I thought it would take hours of research to remind myself of the choicest examples, but typing “Tory Councillor” into Google brought most of these up straight away – I didn’t even have to add any derogatory search terms. Depressingly, if I wrote it now, there would be even more examples to choose from – the rise of UKIP seems to have goaded the Tory id – which, in itself, justifies not deleting this, I think. Oh, the last paragraph refers to the protests about education cuts/tuition fees etc. shown in the photos. 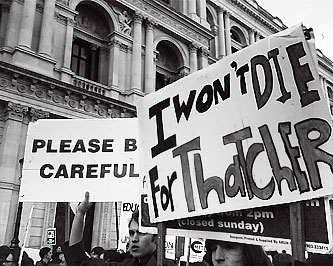 I went to see comedian Chris Addison a few weeks ago – at the Bloomsbury Theatre, I didn’t just pop round his house for a bit of advice about damp-proofing – and, although it was an excellent evening, one thing left me slightly worried: a passing uncomplimentary reference to Margaret Thatcher elicited from around half the audience not approving cheers and murmurs of endorsement, but an intake of breath and a wriggling awkwardness. Now, obviously it’s ages since Mrs T. has been a regular feature of most comedians’ sets – they’ve had other demons to bait. But it was a bit of jolt for those of us who remember Hackney town hall in the early eighties, draped with a banner bearing weekly updates of how far past three million Tebbit, Joseph and the rest of the gang had managed to push the unemployment figures… and giving spare tins from the weekly shop to pallid huddles of miners’ wives outside Gloucester Road Gateways on Saturday mornings… and picking our way from door-to-door through John Major’s post-Thatcher wasteland, promising the occupants of the Horfield prefabs that things really could only get better under Labour (I was living in Bristol at the time, in case you’re wondering where these places are). Yes, she was now a frail and powerless old woman, but – had people really forgotten?

During the interval, I tried to remind myself that no one under thirty has ever had the chance to vote out a Tory government, so maybe they were the ones gasping – the teenagers and twenty-somethings for whom History stopped with Hitler, and to whom the last thirty years are just a hotchpotch of hearsay and rumour. That would make sense: they were probably not only confused that the thin man with the radio mic was insulting an elderly woman, but also put out that he should be so rude. Perhaps I just have to accept that Margaret Thatcher will soon be nothing more than another vague historical figure, a Chamberlain, Lloyd George or Gladstone: the name will ring bells, and you’ll know they were something important once, but you can’t say precisely when, or why. Was she something to do with the Corn Laws? Yes, these gaspers would be the young people who for years now we’ve been told are politically apathetic and increasingly inclined to conservativism with a small c.

The teachers at school, they took us for fools
They never taught us what to do
But Christ we were strong, we knew all along
We taught ourselves the right from wrong

Meanwhile, more and more celebrities seem happy to admit to being Tory with a Big C, and nobody pulls them up… which, for anyone whose political consciousness was first raised by the NME – in whose inky, text-heavy pages the careers of popstars foolish or naïve enough not to toe the Red Wedge line would be wrecked on a weekly basis – is unfathomable. Obviously in many cases their stance is born of woollyheadedness and ignorance rather than actual callous selfishness – when, for instance, Tracey Emin complains about cuts in the arts budget whilst simultaneously moaning about the amount of tax she has to pay, you have to bear in mind that she’s not very bright and probably shouldn’t be allowed to use the craft knife unsupervised – but just because someone’s ignorant doesn’t mean you shouldn’t shout at them. It’s actually quite a good reason, as ignorance can be cured, even if stupidity can’t. But people don’t seem bothered. Maybe the second-worst crime of the recent Labour governments (we all know what’s number one) has been to instil the apathy of disillusionment?

It was love, but Tories don’t know what that means
She was Michelle Cox from the lower stream
She wore high-heeled shoes while the rest wore flat soles

Throughout our dark recent past, though, there have been occasional flashes of hope thanks to the existence of one wonderful thing: Tory Tourette’s.

Let me explain. Tory Tourette’s is an incurable medical condition thought to be caused by a genetically inherited hardening of the heart (and possibly by being born without a soul, though medical opinion is divided on this). These days, symptoms can be easily kept in check by a long-term course of medication prescribed by a clinically trained PR. Occasionally, though – perhaps because of drink, self-importance, or some atavistic bumptiousness – a Tory will forget his meds, and start to blurt out what he really thinks. And, in doing so – and here’s the positive, the little flash of hope I mentioned – he’ll remind us what he’s truly like. And, by extension, what everybody else isn’t like. Thus, even as Tony Blair was throwing everything away for the sake of a stupid war, or Gordon Brown was muttering darkly in the gloom about goblins (or whatever it was he was doing), word would suddenly reach us that a Tory councillor or MP had (deep breath)…

… called gay people “sexual deviants”… or said that “negroes tend to be less bright than whites”… and that racism “is as perfectly natural as a man having sex with a woman”… or claimed that gypsies would “stick a knife in you as soon as look at you”… or gone to a fancy-dress party dressed as Madeleine McCann… or called the NHS a “60-year-old mistake” and hailed Enoch Powell as a political hero… or wondered “why it is so offensive to black up your face”… or claimed that people don’t visit Colne because there are “too many takeaways. And too many Pakis”… or said that women should only become MPs “if they were attractive”… or defended bankers’ bonuses by saying that taxpayers should “tolerate the inequality”… or said that British women should walk nude in the street to make Islamic men commit suicide because their religion forbids them from seeing any naked woman other than their wife… or complained that Asian prospective parliamentary candidates don’t have “normal-sounding” English names…

… and then we’d smile, reassured that, no, things hadn’t changed, it was still Us and Them; and that if enough of Us got to hear about this, then – well, maybe all wasn’t lost, and maybe we wouldn’t end up with the economy in the puffy-fingered hands of someone who looks like he should be talking us enthusiastically through the hi-fi separates in Dixons before telling us we definitely need some new speaker cables too, yah?

It’s a slightly perverse argument, I know, but… now we finally have the Tories clinging to the rudders of state again, I’m actually feeling quite hopeful that, after years of political inaction and “oh what’s the point, they’re all the same?”, things are about to get exciting again. Because, with Cameron and the other fellow in power, those defiant shrieks of the Tory id will no longer reach us as muted ghostly echoes from the shires, they’ll ring loudly off the riot shields in Parliament Square, as Lord Young tells us we’ve never had it so good, and Howard Flight sagely advises the world that social welfare just encourages the working class to breed.

And – glory be! – now the supposedly apathetic young are out on the streets, rampaging and protesting and building up tankloads of resentment that will hopefully see them through the tough lean years to come. And that’s really reassuring, because… well, I hate to say it, but I’m really not convinced it was the teenagers and twenty-somethings at that Chris Addison gig who were sucking their teeth: I reckon it was people my age, who’ve lived through it once and, for reasons I really don’t understand, seem quite prepared for others to do it all again.

Someone told me Patrick Stewart often gets the tube at Bermondsey; I picture him softly mouthing shwoosh when the platform-edge doors open… just secretly, to himself…

How I was abducted by aliens from South Harrow station and had the true nature of Boris Johnson revealed to me after being forced to mate against my wishes.

The man at the neighbouring checkout was looking at her with something that might have been curiosity and might have been pity. Her cheeks prickled. It was years since she’d needed to tell the difference.

How the Archbishop of Canterbury lost his deckchair concession and why trammelling the Thames had its drawbacks. Or a history of London footbridges, if you prefer.

I stare bleakly into the abyss and wonder whether the election of Boris Johnson is all my fault (it's not, it's all yours).

Partridges? In London? Sorry, guv. Do you a nice pigeon, though. Sorry it's a bit wet.

Leipzig 1989 remembered, and why the Dean of St Paul’s can’t hold a candle to the pastor of the Nikolaikirche.

A trip to Prague, and how the human soul has been replaced by a 64GB memory card.